In May 2019, three real scale split tests of the TTMJ System were executed at TREVI’s premises in Cesena Italy, using three sawn elements with the joint set in horizontal position.

Each sample, 1.0 m wide, 2.5 m long and 1.48 m high, was drilled through in order to create a longitudinal hole for the entire length with the scope of accommodating two rock splitters able to “split” the panel portion from the jointed beam portion.

The relative displacements between the two portions during the splitting test were measured by means of four transducers applied astride the cold joint to each side of the sample, for a total of 16 potentiometric displacement transducers with a maximum stroke of 10 mm.

A preliminary finite element model was created in LS-DYNA by Arup in order to carry out a blind prediction of the joint behaviour when subjected to tension forces. This preliminary model was based on as built drawings and on expected mechanical properties of concrete and steel. 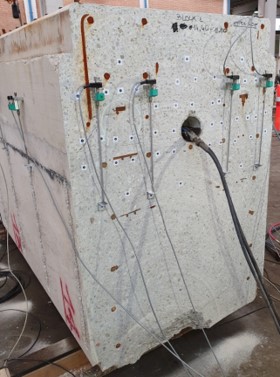 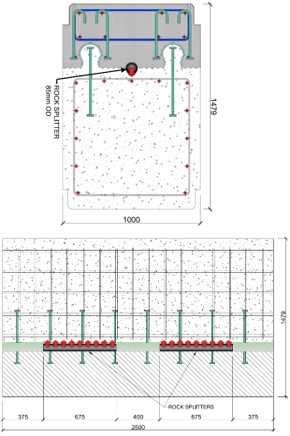 Scheme of the split test

The force at first peak failure observed during the laboratory test ranges between 466kN/m and 583 kN/m for the three tested samples, whereas the value of the LS-DYNA analysis is about 600kN/m.